THIS IS PROBABLY THE BEST-KNOWN and most widely reproduced image of the Charge of the Light Brigade:

But just so you know, it’s actually not the Charge of the Light Brigade. It’s the wrong cavalry (heavy brigade not light), and the wrong enemy (France not Russia), and even the wrong war (Napoleonic not Crimean). Above all, this Charge had the opposite outcome (it ended in victory).

The original painting is Elizabeth Butler’s Charge of the Royal Scots Greys at Waterloo in 1815, known as “Scotland For Ever” – an event that took place nearly four decades before the catastrophic Light Brigade Charge at Balaclava (25th October 1854).

Here are some more examples of Not-the-Charge-of-the-Light-Brigade.

END_OF_DOCUMENT_TOKEN_TO_BE_REPLACED

MANY THANKS to correspondents for their most interesting comments on what people may or may not know about the Charge of the Light Brigade, and what the Charge “means” today.

I imagine very few people today have much of an idea of who/why/when/what the whole thing was about. But I may be wrong.

So in the interests of sociological and historical research, readers would do me the greatest favour if everyone would ask three people – young, old, whoever – what the phrase “Charge of the Light Brigade” suggests to them. (If anything.)

Perhaps you could probe a bit. Do they know it chiefly as a poem or as a military event? Both? Do they know the poet’s name? Can they identify the war? And do they have a rough idea of when it took place? Of who was fighting whom, and with whom? Of other battles? Of famous participants?

My own findings, admittedly based on a tiny and skewed sample (I don’t get out much), are not too encouraging. Even many university arts graduates don’t have much of clue, though there are some impressive exceptions.

On the other hand, if you push and prompt a bit and you do get some light-bulb moments: Florence Nightingale, Mary Seacole, the pub at the corner that shares its name with Great Aunt Alma.

That said, thanks largely to Tennyson (and a couple of blockbuster films), but also to countless small references in popular culture (which I try to keep some record of in the EJB Archive), the “Charge” looks like sticking around in the national consciousness for at least some time to come.

In the meanwhile, for anybody in need of a refresher course on the Crimean War here is Sellars and Yeatman’s “Memorable History of England comprising all the parts you can remember” that is 1066 And All That (first published 1930):

“THE CHARGE OF THE FIRE BRIGADE

The Battle of Balaclava, famous for the Charge of Fire Brigade by Lord Tennyson and 599 other gallant men who, armed with Cardigans and Balaclava helmets, advanced for a league and a half (4 1/2 miles) and back (9 miles), with the object of proving that someone had thundered the wrong order. (In which they were completely successful.)”

And of course we shouldn’t forget Flora MacNightlight, The Lady with the Deadly Lampshade… 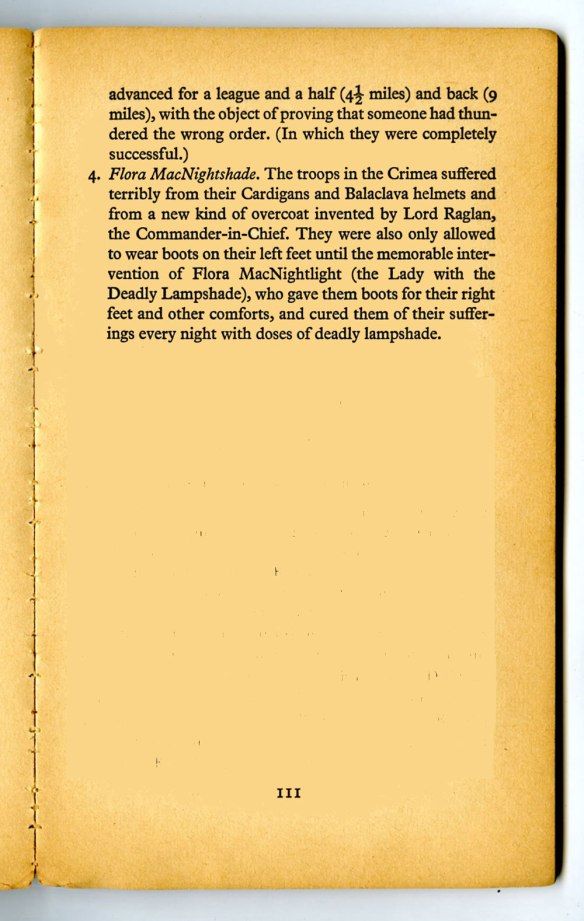 Ever since the referendum in 2016, I’ve been collecting articles, blogs, cartoons and other references that compare Brexit to the Charge of the Light Brigade. All use the Charge – the event itself but also phrases from Tennyson’s Charge poem – as a rich ragbag of metaphors: for a headlong rush, for recklessness, for a futile attack on a very much stronger enemy, for self-destruction, for blind obedience to orders, for exposure to attack from every side, for miscommunication, for a lack of clarity about objectives, for a massive blunder by a remote, utterly incompetent (and largely contemptible) leadership. However, in modern usages there is rarely a hint of glory or nobility or bravery or honour. Just the certainty of imminent disaster.

Here are some typical headlines:

“The Brexit Brigade is riding into the Valley of Death”

“The Charge of the Light Brexit Brigade”

“If Brexit was a historical battle…”

I have written about this before, but there have been innumerable examples since. Yes, the Charge has become a cluster of cliches. But it’s almost as if commentators are at a loss to know how else to describe the enormity of the folly of Brexit. (Though it does raise the question of what readers actually “know” about the Charge itself – something I hope to return to in a later post).

Most who deploy the Charge metaphor are Remainers, but not all – here for example is the Tory ex-cabinet minister Andrew Mitchell (he of “Plebgate” fame), speaking just a few hours ago…